I recently received an email from Oleg Khovayko, the CTO of Emercoin, after he read my original post about blockchain DNS. He wanted to raise three points to me. The first is that emerDNS has gained a following in Russia for censorship circumvention. The second is that he maintains a list of active emerDNS domains. And the third is that they’ve simplified the process of running an emerDNS resolver. That third point is nice, because it appears that the Firefox plugin I used last year no longer works. Interestingly, when installing the PeerName Chrome plugin for this post, the webstore automatically recommended some plugins popular in Russia for censorship circumvention. Looks like we’re on to something.

That first point is a very important one that I hadn’t considered, since I live in a country with relatively free Internet (for now, anyway). So it looks like this is worth exploring. It’s also been almost exactly one year since my original blockchain DNS post, so a followup sounds appropriate. Let’s take a look at what’s happened to blockchain-dns in the last year, and how viable it seems to be as a censorship circumvention tool.

I won’t go through it again, but I simply repeated the same enumeration steps I took last year. I upgraded to the latest namecoin and emercoin versions and reran the python scripts. The issue I had last year with namecoin’s DNS enumeration not terminating has since been fixed, and the whole process was pretty quick. Then I took the enumerated domains, fed them back into EyeWitness and waited for the results.

The list at https://blockchain-dns.info/explorer/ says they’ve catalogued 5,266 sites with IPs. As you’ll see in the next section, we have quite a bit more than that. As of writing this, their list has not been updated since October 2019. I guess a lot has happened since then. Interestingly, this mirrors a similar pattern that’s being seen in the Tor network. 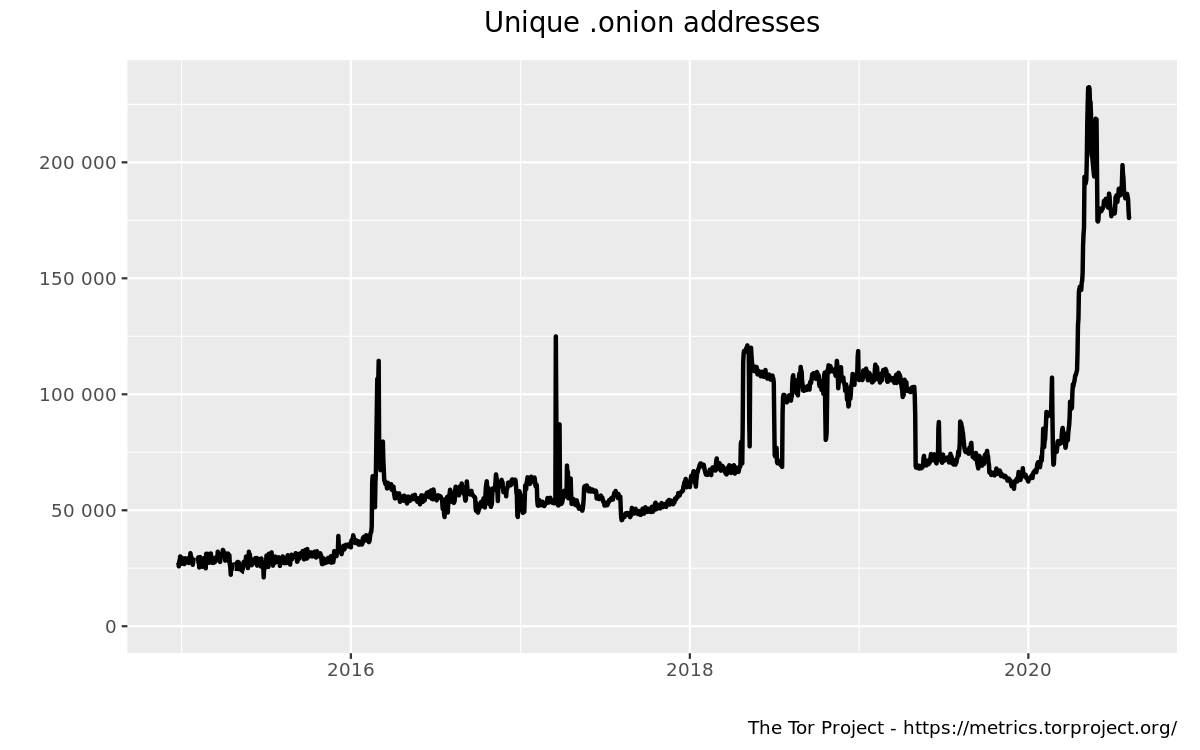 Both the Peername plugin and Runet bypass plugin chrome suggested include support for onion domains. Wildly speculating here, but the trend appears to be an increase in the use and registration of these “censorship resistant” domains since the start of 2020. Perhaps with more people being stuck at home due to the SARS-CoV-2 pandemic, there’s been a global increase in demand for censorship resistant web services. That would certainly mirror patterns we’ve seen with the general increase in demand for regular Internet services.

Here is the categorization from EyeWitness, with a 2020 column for current results and a 2019 column to easily compare with last year.

Right away we see we have nearly twice as many domains with A records as last year. The categorizations are mostly the same as last year, with a noticeable increase in 401/403 errors and general errors. Most of the new sites appear to be in the error categories. The general errors are interesting, because visiting some of those sites manually actually does resolve (e.g., http://darksite.lib/). I was scraping over Tor, so if there are more mature sites this year than last year it’s possible that many of these “error” sites are simply blocking suspicious activity. For example, a few of the sites Oleg listed in his post do not appear on the EyeWitness report, but do appear when you navigate to them.

Let’s go through some of my favorites. There’s too many sites this time to go through them all, but a few stood out. I tried to focus on sites that did not redirect to a regular domain address, sites that are truly committed to blockchain DNS.

There’s this site, which is nothing but cats.

There’s this site, which appears to be a backup of the online community Advogato.

Besides that, there’s a lot of the same credit card shops, parked domains, blogs, and general types of sites as last year.

Let’s look at some of the sites that Oleg listed in his post, and what they’re aimed at. To the best of my knowledge, all of the content of these sites is legal to view in the United States if you are over 18. The services, such as gambling and pirated movies, may not be legal to use but you can look at the advertisements. Clicking some of these links may not be legal where you are (e.g., downloading a list of torrents or links to pornography). It’s on you to know your local laws and decide to click these links, you have been warned. The full list provided is:

For this part I’m going to rely on the data collected by the Open Observatory of Network Interference. OONI distributes a software probe that volunteers can install on their computers that actively tests for Internet censorship in the volunteer’s location.

The first site, flibusta, appears to be a library of books and is normally accessible on it’s dot is domain. If we check the OONI dataset we can see that the domain is censored in Russia. In fact, the front page of the site lists their tor mirrior, i2p mirror, and emerDNS alternative domains.

Our next site is rutor. This is a torrent site, with pirated content available. Pretty standard stuff for a torrent site. Once again, OONI shows the site as actively censored on their main domain. Their “blocking information” page gives some more details. The rutor.org domain has been put in a hold by their registrar, rendering it unusable. The alternatives are listed as two alternate registrars, tor, i2p, and again emerDNS. So it does appear that sites are using emerDNS to circumvent censorship.

The last site we will confirm as being censored is pornolab. The main site, pornolab.net, can be confirmed by OONI as somewhat censored in Russia. From what I can tell (I’m not Russian, so forgive my ignorance), the legality of pornography in Russia is dubious (for what it’s worth, it’s also unclear here in the US, as I recently learned from reading the hilariously anti-1A Parler community guidelines). The Russian state has many legal apparatus by which it can block or remove sites and services, for a variety of justifications. Those laws have, sometimes, included pornography, which is technically legal to view but illegal to produce or distribute. So if you’re a Russian citizen, accessing a porn site is fine but hosting one is not. This gives the government permission to block any “distribution” (i.e., website) as it sees fit. It’s worth noting that the site has a section for Gay pornography and another section for Trans pornography. Russia has propaganda ban laws against “non-traditional sexual relationships” and has used them against “pornography distributors” before. I’m not going to make recommendations for what is or isn’t safe for LGBT activists in Russia (and let’s be clear: this is a porn site, not an activist site), it’s just interesting to note that emerDNS appears to circumvent domain based censorship of “non-traditional sexual relationship propaganda.”

It appears that blockchain based DNS is a viable means of circumventing censorship when that censorship is enacted through domain registrars. It might help with DNS resolution based censorship, but there are many ways to circumvent that already. If IP based blocking is in place, blockchain DNS won’t help and you probably want a VPN or Tor. Still, I originally discounted the idea when it does appear to be working. I wouldn’t use it for anything that might get me arrested, but if the worst thing I’m facing is a revocation by the registrar then sure.